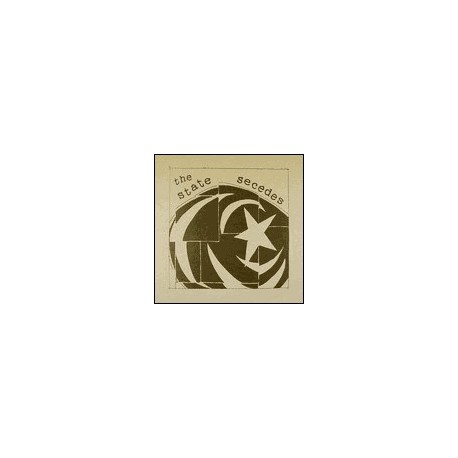 RAR records from 2000 from Level Plane.

Collective Zine: " bought this on impulse after pottering around a few web-sites one evening the other week. They all seemed to compare State Secedes to different bands (one said 12 Hour Turn and I Hate Myself, another Angel Hair, and another the Red Scare - like I am not going to buy it after those 4 comparisons) and I just took the plunge..

"First offs, I have to mention the rather odd Nation of Ulysses-esque concept these guys have going on. The insert booklet makes a big play on conspiracy theories and things, and how the band are doing something or other, oh, I wasn't in the mood to read it all, but it seemed pretty weird.

Second offs, the music is great. I'd liken it to a Portrait / Red Scare cross. Most of the tracks are chaotic screamo hardcore. And particularly unhappy screaming at that. Not quite the "lots of people, dying, and in extreme pain" that Portrait are able to produce, but getting that way. The first track is sombre, and piano led, but after that, they get into their groove. And groove they do, the guitars are often repetetive, but it provides the perfect opportunity for you to do the emo rock back 'n forth thing. The songs tend to be fairly long, and sometimes build up to a climax, sometimes hit the repetetive guitars quite early, with occasional mellow parts, and subtle changes bringing about the variation. There is a song on side b (none of them have titles as far as I can figure!) that stands out from the rest, simply by not being crazy or hardcore in the slightest. Meandering and eerie, with soft spoken vocals, and haunting female backups, it's particularly special. And the last song is apocalyptic in the end of the world stakes. Aaaaaaargghhhh!

Yeah. So: people into this style of hardcore, get it."