> Music (by genre)>Hardcore>HEAVEN IN HER ARMS / COHOL - Split CD
Sale! 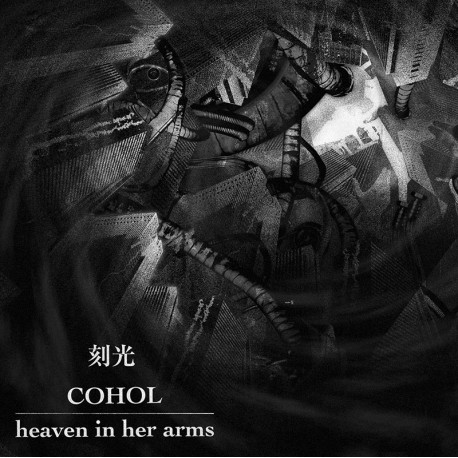 Split  CD between HEAVEN IN HER ARMS and COHOL from japan

With about 14 million inhabitants, its ever buzzing traffic and bright neon lights, Tokyo is a city you can get lost in easily. It will also make you feel lost. Alone in the crowd, alienated both by and from modern life.

Ever since their first releases in 2006, Heaven In Her Arms have captured all those feelings their home town evokes with their unique, refined blend of sludgy Screamo and erratic Post-Rock. Yet they have never indulged in desperation. Underneath the shattering riffs, elegiac melodies and the versatile but forceful drumming, there lies hope. A hope that shines through the abysmal loneliness. The three songs on this split record pick up where their sophomore album “Paraselene” left off. The hymnal, carefully constructed build-ups of 黒い閃光 (“Black Lightning”) the melodramatic, film score like interlude 繭 (“Cocoon”) and the grinding, claustrophobic 終焉の眩しさ (“End’s Glare) form a seamless narrative that both

musically and atmospherically captures the wide range of stylistic influences and emotions that make up the five-piece’s epic trademark sound.

Cohol put out their first two demos, "Crying Of Humanity On The Liturgy" in 2005 and “Consume The Obsessed Hatred On The Liturgy” as a small-run CDrs which were followed by the band’s first full length 空洞 (“Empty“) in 2010. In the meantime, the trio has relocated to – you guessed it – Tokyo and have just recently re-emerged with three fresh songs on this split record, initially released by Daymare Records last fall. Much like Heaven In Her Arms, Cohol like to both bend and blend genres. The foundation of their precise yet brutal sound draws influences from the rich musical traditions of Death and especially Black Metal, but also incorporates elements of Grindcore and Thrash Metal. While the opener 不毛の地 (“Waste Land”) and the third song, 疎外 (“Alienation”), are aggressive sonic tours de force, the connecting piece木霊 (“Echo”) creates an eerie ambience with layered guitars, muffled field recordings and shimmering drones. Unlike their split partners, Cohol face everyday alienation with sheer hatred. But just like Heaven In Her Arms, they know exactly what they are doing.