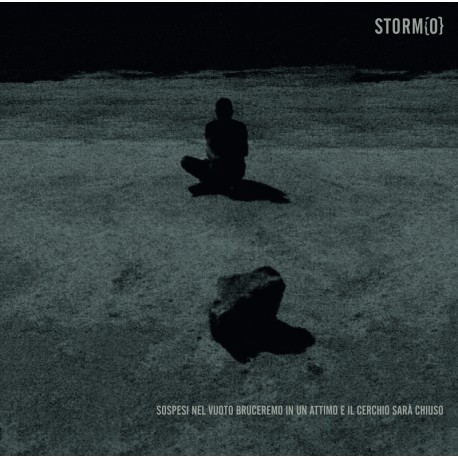 StormoO is an Italian four-piece band that formed in 2005 and called growing attention since their fi rst full-length “Sospesi Nel Vuoto Bruceremo In Un Attimo E Il Cerchio Sara Chiuso” in 2014. After selling out the fi rst press pretty fast, the band found in Moment Of Collapse Records a new partner for entering a new territory. 15 songs of intense hardcore. Packed in a nice inside out printed Gatefoldcover.

The group is based in Feltre (Belluno/Italy) and their name is derived from the mingle of a dark storm and the word for a fl ock of black birds, stormo, in Italian. This imaginary union is graphically described by the two brackets that represent the fl ock of birds, and the letter 'o' between the two brackets, representing a drop. StormO play a unique mixture of pulverizing hardcore that is guided by an aggressive drumming leading into brilliant set breaks which mark the only spots to gasp for breath. The guitars act in the frame of a dynamic songwriting that leaves space for a couple of uplifting moments. The basis of StormO’s sound remains always a harsh, driven and distorted wall of uncompromising played Hardcore that remind of the early works of bands such as Uranus,Converge, Orchid or Catharsis. The vocals are screamed in their native language and vary from sounding in a range from complete anxious to the abyss of desperation. In more than half an hour these guys never lose intensity and convince on full scale that they share the passion for intensive music, paired with an own expression. The band played more than 130 shows sharing the stage with bands such as: Ben Frost, La Dispute, Unsane, Big Business, Bane, More Than Life, Celeste,
Year Of No Light and many more.