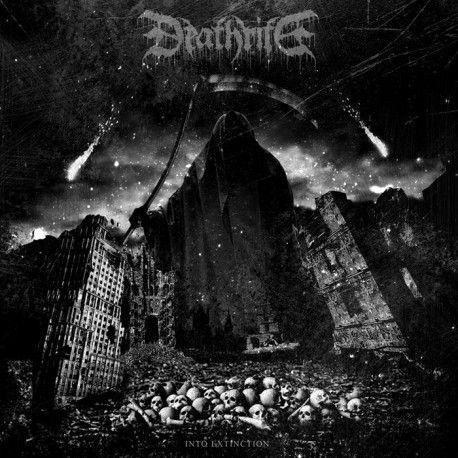 DEATHRITE is undoubtedly the definite embodiment of the unholy alliance of music's heaviest spawns. Already smashing skulls and breaking necks with their previous releases, their 1st proper full-length "into extinction" even exceeds these earlier recordings with its uncontainable fury, knuckle-dragging brutality and filthy riff bombardment. DEATHRITE merged only the most severe elements of death-metal, grindcore, hardcore and punk to create an absolutely merciless, harsh record that stands out like a monument of savagery in nowadays watered down scene - a fact also valid for their forceful, stunning live performance that most likely turns into a beer- and blood-soaked mayhem. "into extinction" is the perfect remedy for people who think that the latest NAILS record wasn't heavy enough. The re-press of "into extinction" (originally released in 2013) comes on green colored vinyl, with a lyricsheet, black innersleeve and includes a digital download card. This album crushes every fake ever.