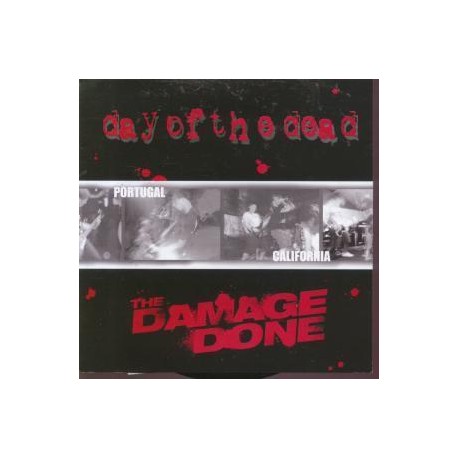 First up is Day of the Dead (Portugal) with more awesome melodic hardcore. This time around their songs are even more forceful and memorable, so I'm really starting to get into them. If they were from California they'd be fucking huge, I guarantee you that. They even kick out a cover of Los Crudos' "(That's Right)... We're That Spic Band". Awesome. The recording is really good this time, too. It's not really heavy, so there's plenty of clarity, the vocal shouts are forceful, they've got that plunky and well defined mid-90's styled bass tone, etc. No complaints. Lyrically the material is pretty positive and is best summed up by one of the brief song descriptions: "This is about freedom of choice. To be in control of your own life... your own body. Life is only meaningful if you really feel alive." The Damage Done, from California, is up next with a similar style of old school based hardcore that's slightly more aggressive and straightforward, with scarcely a hint at melody, though such traces are present. It's not exactly original, the song structures are basic, there are a lot of classic breakdowns and gang backup vocals, etc. It's still good, though. I've heard far worse when it comes to basically reliving the past as far as hardcore's concerned. The production is fine by me. It sounds like most of this stuff. It's not perfect, but it's not muddy, and the mix is solid. I'd like to hear slightly more bass, but that's really it. The drums sound awesome, the vocals aren't too loud, and the slight dirtiness of the guitars works out. I really like their lyrics though, because the content's longer and less repetitive than most of these bands, and the topics, while not always something new, do seem very sincere. "And if life's a game, it's a game of give and take. But how much can one take of giving and giving and giving? I may be down, but I'm not out. And when I write these words, and when I hear your voice, I know there's still a reason to believe..." The layout's great. The 7" comes in a slightly oversized black, white, and red sleeve with an extra flap that wraps over the back cover. There are some band photos and such, and the logos, and then mostly straight text over a black background, but everything looks nice and clean. This is a rockin' split. I'd love to hear more from Day of the Dead especially. (7/10) (Aversion Online)