> Music (by genre)>Hardcore>BOTCH - An Anthology Of Dead Ends LP 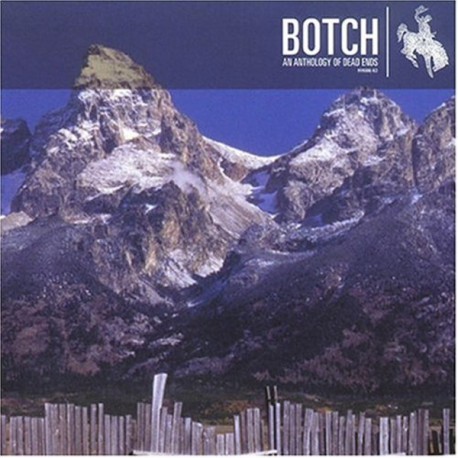 Botch's final effort. The godfathhers of metallic bleaking hardcore without all the tough guy bullshit.

Botch is perhaps the greatest “heavy” band of the last ten years. We don’t mean to be grandiose, we’re simply stating the truth, as anyone who has witnessed the Botch live experience might attest to. As a friend of ours put it, when Botch took the stage, not only were they unquestionably the greatest band of the night (regardless of who else was playing), but for that 45 minutes they were the fucking greatest band on earth. The first time I saw Botch was a mind bending experience - though afterwards they claimed their set was “terrible”. I thought to myself “if this was an off night I’d hate to be the bands
playing with them on a good day”. A good day for Botch consisted of utterly laying to waste everything in their path and having a grand ol’ time while doing so. The same is true of their recordings, huge monstrous concoctions of metal, noise, indie rock guitar trickery, full of depth and minute secrets which slowly secreted themselves with successive listens. There is no question that part of what made Botch so great is their ability as players, but more important, and even more impressive perhaps, was the way they fit the pieces together - odd time signatures, seemingly impossible riffs made to sound easy, the occasional melodic passages, and devastating anthemic movements that managed to inspire hordes while simultaneously escaping the redundant simplicity of the conventional hardcore sing along. In their nine years of existence Botch managed to push out a slew of 7”s, split EPs, and two full lengths. With each successive release Botch upped the anti considerably - not just for themselves as a band, but for the underground as a whole. Their first full length American Nervoso (early 98) put them “on the map”and thrust them into the league of then hardcore heavy weights, i.e. Converge, Coalesce, Deadguy, etc. Following this album with a few years of extensive touring and preparation for the next release, Botch elevated their status within the “scene”(as well as outside of), and began to grab the attention of the world at large. However it wasn’t until the release of their second masterpiece (and we don’t use that term loosely) We Are the Romans, that Botch fever took hold nationally and internationally, infecting thousands and garnering the praise of music journalists far and wide. It’s been a long two years since the release of We Are the Romans and much has happened in the meantime. Botch has continued to tour both the US as well as the European continent and have seen many new bands emerge, building upon the tracks they themselves helped to create. Bands like Dillinger Escape Plan, Converge, and many others have continued to push the envelope of technical ferocity and awe inspiring performances in the live setting, but still Botch stand alone - proving themselves to be ultimately one of the most entertaining, challenging, and unique entities to have ever existed with in the hardcore realm and beyond it. This tremendous 6 track EP is a fitting testament to their will and intent, cementing their legacy as one of the untouchable greats, destined to influence the coming generations. We are more than sad to see them go, but as shown from the opening notes of “Spaim”, they absolutely refuse to go down quietly and we can all rest assured that the echoes of this explosion will shake us for years to come.