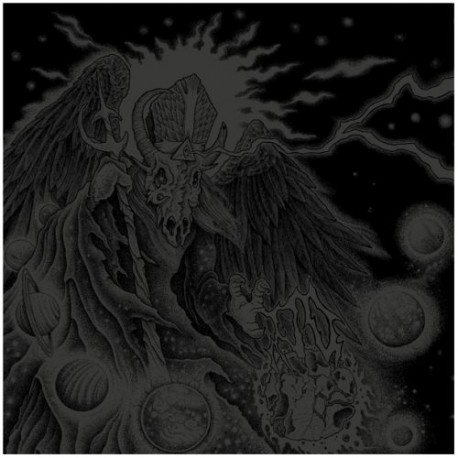 For this eagerly-awaited Split LP, the North-West of England meths the North-West of German as two storming merchants of doom crash headlong into each other for half-an-hour of immersive Sturm und Drang. From an early pressurized melting pot where Bradford and Liverpool´s Lazarus Blackstar crust-coated doom and blackened death-drone brews inside a morphing structure, the record steadily winds up the tempo until Mannheim sexted Black Shape Of Nexus take over and begin to introduce experimental layers of feedback and replace grit with groove. It all adds up to a wonderfully wretched experience that aims to bury you deep beneath six-feet of stinking, blackened soil.
Setting off through the sludge and buzz-heavy riffing of Lazarus Blackstar’s “Command and Control”, Mik Hell’s growl and dissonant rage pitch us downwards until they find their spiritual nadir in a ponderous hole where two sets of layered vocals tear lumps out of each other upon a bedrock of whining drone. From here they dust themselves off and settle into the patchwork quilt of sections that form “Whispering Through Broken Teeth”. Reminiscent of St. Vitus and, to a point, Eyehategod there is also a moment where, disconcertingly, it all begins to sound a bit like a slowed-down Iron Maiden tape. Walking you through, we’ve got an introductory riff that cuts abrasively into a rumbling verse, before heading down to half-time for the chorus and then out into a displaced, yet memorably upbeat riff. Rinse and repeat ad infinitum.
Experimenting with much more success, B.SON tug at their Neurosis chain and flush out a tongue-in-cheek offering to the Gods of doom. The 11-minute “Honor Found In Delay”, littered with psychedelic hits of feedback and noisy electronica, gets you deep in the gut with a thunderous, soul-shaking series of chords. The construction is much more organic here and stands in direct opposition to Lazarus Blackstar’s harsh segues. When they find their chug-friendly two-note doom boots they stomp about in them like pigs in muck with Malte Seidel screaming blue murder from, what sounds like, the other side of the street.
Best of all, closer “Always And Only” spends its entire 9-minute length revelling in the joys that a simple-spined, steadily evolving, quality tongue-and-groove doom song can supply. And who better than George Orwell to provide the LP’s morbid epitaph? His soundbite taken from the BBC Series “The Life Of Orwell” plays this intriguingly miserablist LP out – “If you want a picture of the future, imagine a boot stamping on a human face… forever”.