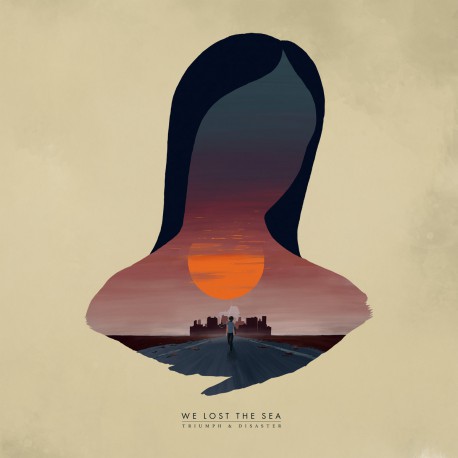 Following their modern classic Departure Songs, a record about heroism and sacrifice in the presence of insurmountable odds, Sydney, Australia’s We Lost the Sea return with a new conceptual collection of songs centering around the evolving and harrowing tragedy of an era that should be our proudest yet continues to unfold as one of our most regretful. Triumph and Disaster is an artistic exploration of how our greatest advances have brought our world to the brink of destruction. The record is in ways a reversal of the thematic elements of its predecessor. Rather than giving melancholic ideas an epic scope, We Lost the Sea begin with a towering concept and bring to it nuanced emotional shadings and a sadness painted with unique whimsy as it ponders the feeling of gazing upon the sweeping grandeur of what was once ours one final time through tired, crestfallen eyes.

The indignation of the record can be seen clearly in the massive riffs and swirling climactic maelstrom of the album-opening single “Tower,” the driving progressions of “A Beautiful Collapse,” or the feverish cacophony that introduces “The Last Sun.” But it’s the ways they utilize their broad canvas in the spaces between these dramatic swells that truly defines the tone of Triumph and Disaster. The album is breathlessly expansive in its loudest and most confrontational moments, but its greatest sense of immediacy comes in softer instances, for it is in those places where We Lost the Sea appeal to that which is most delicate and thoughtful in us. The aforementioned tracks deftly balance both approaches, leading piece by piece to “Mother’s Hymn,” which acts both as lament and lullaby as the album’s sonic horizons drift into the distance.

Amidst the darkness of our self-imposed downfall there yet remains innocence and purity and a sense of hopefulness, however fleeting. This largely rests in the hands and minds of children, which reveals a secondary possibility regarding the triumph of the album’s title. In the face of ever-intensifying odds, the dream of a better world dances through this resilient space where ambition and cynicism have yet to combust. It is from this youthful perspective that Triumph and Disaster aims to act as a call to our nobler sensibilities. It is an impassioned love letter to the human spirit, seething and tearful in both its longing for a return to reason and its disquiet surrounding the real possibility of accepting our impending demise. But even as its central figures watch the world fade away, there is a reminder that there may still be time for us to avoid sharing that same fate. — Young Epoch