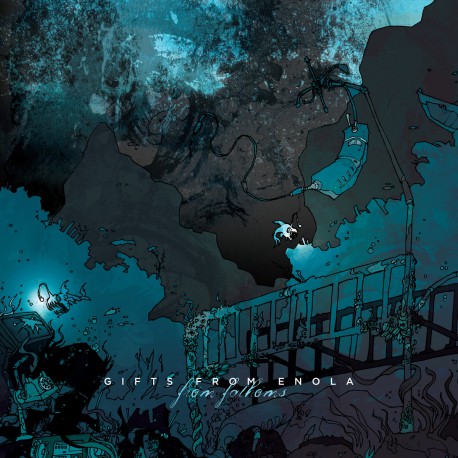 GIFTS FROM ENOLA - From Fathoms 2xLP

When you look through the timeline of post-rock’s widely diversified history, you find bands spread all over the sonic map that are highly regarded for their influence on artists to come. That being said, the first waves of post-rock look very little like what listeners are accustomed to in 2019. Looking through the timeline of the genre it is hard to argue against the American-led third wave as the most directly inspirational for the bands of today. But contrary to what some might believe, it isn’t the formula that defined the period, but rather the lack of formula. When you look at the major bands of this period, what you quickly find is that they were all doing distinctly different things, and all those things went on to become templates for slews of artists to follow. It was the very lawlessness of the era that inspired so many ambitious musicians to follow their hearts into more challenging and thoughtful instrumental territory. One of the more unheralded bands that flourished in this period of joyous experimentation and discovery was Virginia’s Gifts From Enola.

In 2009 this group of college friends released From Fathoms, a record that is notable for its decisive insistence on creating its own rules and the palpable sense of creative joy that exudes from nearly every note, every dynamic shift, every moment that gifts the listener something entirely unexpected and wholly welcome. Drawing inspiration from the deep well of inspired post-hardcore and prog-leaning bands that characterized the richly rewarding early-aughts American alternative music scene, Gifts From Enola was able to flawlessly transpose that energy and vitality into primarily instrumental soundscapes, expanding the palette and the possibilities of a musical form that was already flush with enthusiastic invention. Throughout From Fathoms eight tracks there is a sense of excitement and creative outpouring that sets Gifts From Enola apart from some of their more carefully-measured contemporaries. Their willingness to let everything to hang out, to leave nothing on the table, is what gave them their vitality, and a liveliness of creative spirit that is tangible. This is one of those rare records where you can literally feel the joy with which the band approached their compositions.

Having recorded the record entirely on their own as young musicians in a studio on their college campus, the one thing From Fathoms lacked was the strength of production that their later albums would possess. Now approaching its tenth anniversary, the band has teamed with producer Will Benoit (Junius, Caspian, Constants) for a new mix and master that brings the album into the present day with a renewed fierceness and clarity of vision that demands re-discovery. When you explore tracks like “Trieste,” “Thawed Horizon” or “Aves,” you will see a band that deserved to be considered alongside the juggernauts of their era. With dunk!records brand new release of From Fathoms listeners will finally have the opportunity to hear this record as it was meant to be heard, and the experience will leave no one wanting.