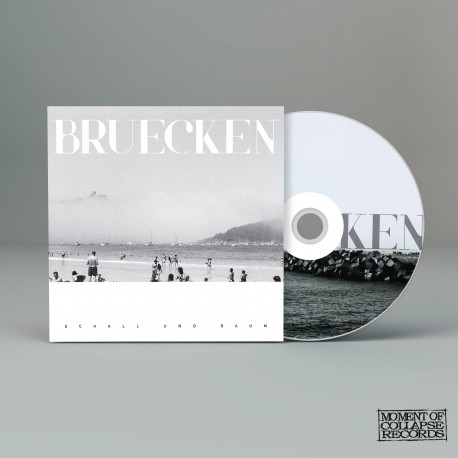 This is a Preorder.

BRUECKEN started back in 2015 as a Post-Hardcoreband. After a well received first EP the band went through several different plus difficult stages, to return in 2019 with a slightly changed line-up. Now presenting instrumental Post-Rock coupling punk attitude and ethos with progressive aspirations.

„SCHALL UND RAUM“, which carries five songs, is the result of loss, love, passion and friendship. The range of sound lasts from heavy bursting walls to calm moments of retreat and salvation. With caution and concept BRUECKEN managed to create a multi-faceted signature sound, that draws its ink through different genres.

With crossing corner posts and collecting all those different influences BRUECKEN play an unorthodox but fluent version of atmospheric music, that challenges the genre defining borders of Post-Rock.

The Band stated following words regarding the release:

"This record is rooted in adverse circumstances but also in a deep feeling of connectedness. It’s a shot at expressing sudden and overwhelming imbalances in sound and space: A feeling of numbness and dizziness – because someone’s missing – because you have to accept the decision of others to go their way. But there’s also a feeling of joy and thankfulness about new connections and old ones that can’t be severed. This record tells about gaps and blanks that can’t be filled.The place of someone with whom we embarked on this journey, is now vacant – and still this sparks pain, anger and grief.

The music remains – a firm grip onto those positive energies which are gifted to us through songs, words and memories.Through the existence of this band they can be carried on. That’s why these songs shall be a signal towards hope – without ignoring all the darker sides of live. Our hope is directed against the cruelty of borders and rigid categories, against hate and injustice which racism, sexism, anti-semitism, fanaticism and capitalism plant and spread in the daily life of our fellow humans. Against the incapability of politics to have all means to save our planet but still fail miserably. Hope to us means believing in making progress where hopelessness forces people to think that there are no alternatives. To hope means to take action!"

„SCHALL UND RAUM“ will be released on vinyl as a limited and handnumbered version as well as on CD and digital platforms in November 2019.