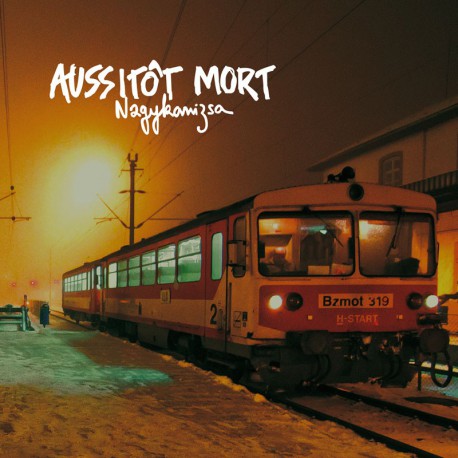 Repress of the sold out 'Nagykanizsa' album by french AUSSITOT MORT.

Intentionly released for their russia tour in 2012 as a CD, Nagykanizsa found the way also on vinyl. Nagykanizsa is a collection of songs by French post hardcore group Aussitot Mort. Just like the name of their first full length 'Montuenga' (Level-Plane & Pure Pain Sugar - 2008), the name of this new record is a place the band had to cross during one of its numerous travels. The LP contains songs from other vinyl releases, like the Split with the japanese HEAVEN IN HER ARMS, the split with THE CATALYST or the EP 'La Ride De Lion'.
This five songs show a new face of Aussitot Mort, with darker and longer songs (a total of  35 min). Just like the life of the band that has done many tours in France, Europe, UK, Japan and Russia, this new album is a long and epic journey. You'll recognize the band writing style mainly consisting of melodic guitars riffs full of effects supported by complex hammered drum riffs; but you will also enjoy the progression that the band is taking on this new recording. Every riff, every part of each songs last long enough to let all details, rhythms and melodies be developed. These longer songs give the listener some time to dream and to imagine all moments lived by the band of travelers that is Aussitot. Mort.