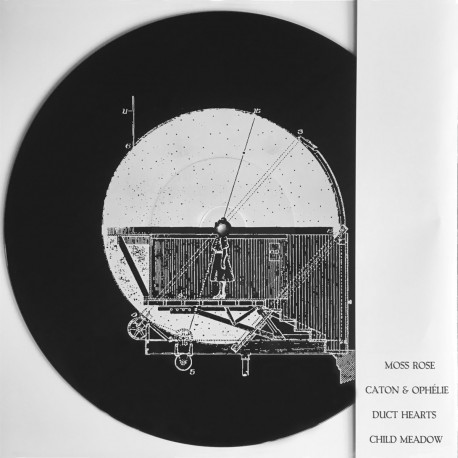 (…) First up on this split is Moss Rose, which features a familiar face amongst it’s ranks. Drowning In Fire is actually the first song I’ve heard by the band and it lives up to the billing. It’s filled with atmospheric and brooding post-hardcore, with screams that reside in the distance. Warm in sound and production. When the band’s blackened-screamo and dual-vocals kick in, your heart will beat that little bit faster and your senses will be heightened due to the song’s volume and it’s emotive intensity. Caton & Ophélie is another new name but they instantly make you take note with A Safe Place Pt.2. The instant hit of their mid-paced screamo is undeniable, with guitars that sometimes crunch and sometimes twinkle, along with the usual crashing percussion and harsh screams give this brief song a lot of life.

Duct Hearts has been a longtime favourite band on this small part of the Internet and with The Sun Downed. And So Did We (Excerpt B), they’e picking up where they left off on “Feathers”. As the title suggests, their song is just an expert but it gives you a clue as to the expansive nature of their forthcoming music. It’s big in so many ways but also gentle, especially when the cleanly sung verse comes in. They’re maturing into such great song-writers. Child Meadow closes the split out in typically great screamo fashion with their song Anders. It’s loud/quiet aesthetic is restrained yet it still breeds anticipation, which is sated by a second-half that features life-affirming hardcore. 2018 will be the years that’s known for incredible 4-way screamo release and this one can do no wrong. All of the bands are great and the music, which only drip-fed is equally as great. (…)