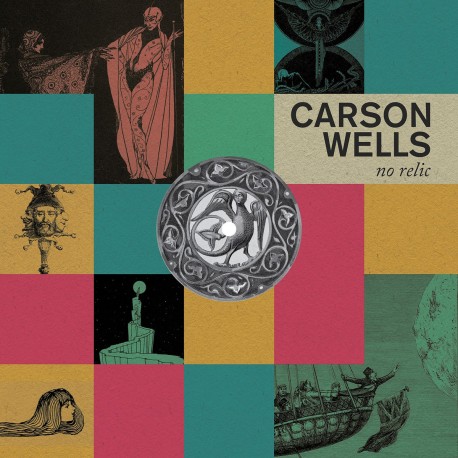 The third album from Scottish post-hardcore trio Carson Wells, out 15 June 2018 via Barely Regal Records and Black Lake Records in the UK, as well as European labels Adagio830 and Discos Finu, in Berlin and Madrid respectively. It will be available on 12” vinyl and as a digital download. All artwork was created by Andy Hemming.

From their roots in mathy screamo, to their intricate and brooding sophomore LP, Tread A Northern Path, Carson Wells has evolved considerably during their near decade as a band. No Relic continues to push their music in new directions, as arguably their most surprising release to date.

At 6-songs, certain authorities might consider it too short for the ‘long-play’ tag, yet, at thirty minutes it outruns their debut album, the nine track 'Wonderkid'. The sprawling compositions on 'No Relic' stand as a testament to the expanded horizons of the trio’s songwriting - switching effortlessly from blistering, scrappy sections that hark back to the band's early output, to expansive, hypnotic passages.