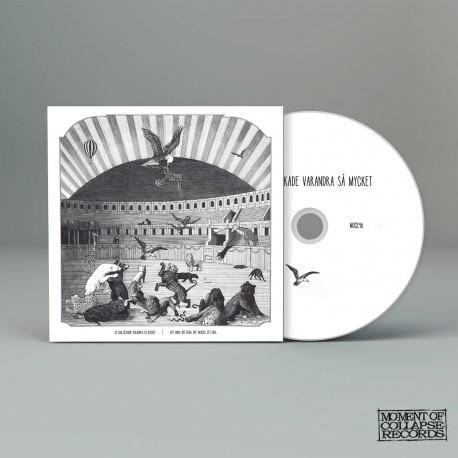 VI SOM ÄLSKADE VARANDRA SÅ MYCKET are a six-piece band
collective from Stockholm with current and former members from
bands like EPHEMERA, YOUNGTEAM and SPEEDMARKET AVENUE.
The band exists since 2012 when they recorded and released their
very fi rst EP ‘Träd Dör Stående’. The band already began working
on their second release „Den Sorgligaste Musiken I Världen“ (The
Saddest Music on Earth) in 2013 when Mark Shaw joined them as
the third guitar player. Previously Mark has played in bands like
THE KHAYEMBII COMMUNIQUÉ and SONG OF ZARATHUSTRA.
Musically, VI SOM ÄLSKADE VARANDRA SÅ MYCKET combine
melodic post-hardcore with elements of screamo bands from the
early 2000s and deliver this distinctive sound that only Swedish
bands seem to be able to create. One of the trademarks of the
band’s debut album is defi nitely the voice of the singer Arvid that
perfectly transmit the emotions and the despair that every single
song holds. Five years after the fi rst album and behind logged
doors the Band worked on a proper sophomore album. Their
new fulllengh is titled „Det Onda. Det Goda. Det Vackra. Det
Fula.“ (The bad. The good. The beautiful. The ugly) and drops a
milestone in the bands history. The new recordings include eight
songs of heartfelt music, that follow more heavy structures than it’s
predecessor. Well balanced guitarmelodies, that are shared by
three instruments, create spheres of hope, love, loss and everything
in between. The bass and drum built a massive foundation, that
sustain all the loud and calm moments of this massive production.