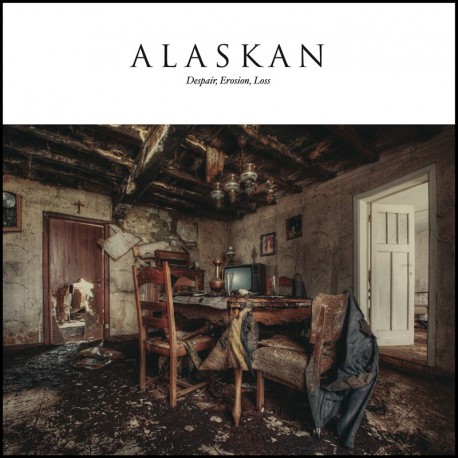 PRE-ORDER. OUT 1st of March 2014. I came across Alaskan because of their affiliation with other Ottawa post metal / sludge bands. Let’s face it: many similar bands have arisen on the Ottawa metal scene in the last few years: Buried Inside, Goetia, Biipiigwan, Collider, etc. Not so far away, whether you are in Montreal or in Toronto, dozens of other bands can be added to that list. The genre established by AmenRa, Fall Of Efrafa, Neurosis, Isis or Cult of Luna is now a saturated market, but I think Alaskan stands on top of the most recent bands food chain. The quality of their music and their dedication help the guys from Alaskan stand out of the crowd. They are in a kind of Cult of Luna-esque dark mood, with almost simple guitar chords that create this loud wall of sound you expect from such a band. Alaskan went epic on most of their songs: they added atmospheric passages and intro, in proportions that help blending the songs together and bringing the listener throughout their livesets without any difficulty. For any three-piece band, there’s always a challenge about song structure, because of the absence of a lead guitar or additional instruments. Alaskan masters perfectly this, and while you can hear perfectly every instrument on the album, you don’t have the impression that something is missing. “Noises” were added here and there in the background, and this aspect of the production makes me want to go back to the album from time to time just for its “layers” quality. Another thing that I mentioned previously is the musician’s dedication to their band. They are serious in their approach, and have one new release every year. Moreover, they have followed the steps of fellows Buried Inside and toured intensively abroad. Live, Alaskan delivers a solid performance and the live set lives to its promises.
While I agree that Alaskan might not be 100% original, I didn’t expect an experimental band either. The band knows how to compose songs that “feels” dark and heavy, and they can easily compare with other bands like Amen Ra. So listen to your friend: Alaskan is without a doubt worth to check out.
Listen to the album here: https://momentofcollapserecords.bandcamp.com/album/despair-erosion-loss