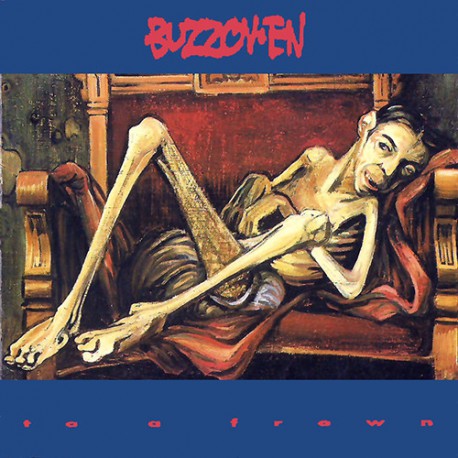 BUZZOVEN - To A Frown LP

Raw as a heroin abscess, Buzzov-en’s debut, To a Frown, ushered in a devastatingly ugly admixture of bastardized Southern rock riffs, heavy metal, noise rock, and the broken bottle aggression of early Black Flag. It packs a violent wallop, with Kirk’s contorted, half-growled, half-screamed vocals threatening menacingly over the sturm and drang of the rhythm section. Though Buzzov-en owes part of its aesthetic — both in appearance and sound — to Southern scum rock outfit Antiseen, they upped the ante in energy, presence, recklessness, and songwriting. Half of the album resides in sludgy blues riffs dragged through the sewer of Kirk’s drug- and violence-oriented lyrics, and the other half is pure Damaged-influenced, early-American hardcore aggression. The band toured relentlessly for this album, destroying clubs and leaving a wake of drug-induced terror in its wake.